In 2009, in the midst of one of the worst current recessions many style conscious women faced an increasingly difficult challenge of trying to look good without extending beyond their budgets.


Christine Sanderson, founder of Le Thrift was no exception. She was a single mom who had represented some of the best known fashion design names like Tom Ford and Roberto Cavalli. Her job demanded she had to look chic when she called on her trendy boutique customers. She also had to clothe a rapidly growing daughter. Yet, because Christine was a single mother, her budget was stretched to the limit. Some months there wasn’t enough to pay the bills, let alone add to her wardrobe. Then she lost her job.

“What’s a girl to do?” she lamented as she tried to find a solution to her challenge. She turned her background in fashion, art and design into survival of the chicest. She took her meager pocket book and her eye for fashion and searched thrift stores and consignment shops in order to find in style, but not-so-expensive wardrobe items and accessories. It was a short time after that event it occurred to Christine that there were countless women in her situation.

An Idea Was Born
The result is the concept behind Le Thrift. Christine used her skills as a professional artist, designer and background in fashion sales to build from an idea that can help women on a budget find accessories and apparel for themselves that make a statement of style. In 2009 she launched LeThrift.com. 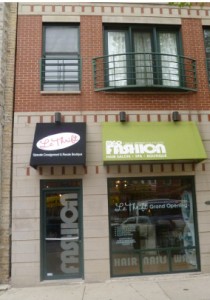 Christine asked herself, “Why not offer a consignment store that feels like an upscale boutique and sells gently used clothing that is like new?” This would be a great way to help women on a budget look like a million dollars. Also, a wonderful way to help the environment, by purchasing gently used items and make it a lifestyle choice. And for those who were looking to sell gently used or new unused clothing they had a place to sell it. In May of 2011 Christine also opened Le Thrift Consignment Boutique at 1754 W. Division in the heart of Wicker Park in Chicago. Shop Le Thrift, to find simply the best 100% authentic designer, vintage and and name brand clothing for women.

To help Others
After the hardships that Christine went through, she wanted to help out others within her community. She knew that she could help out those in need through Le Thrift in small ways. Today Le Thrift works with Bridge to Success and Catholic Charities Emergency Assistance Program among many other local charities.

NOW
Recently, Le Thrift Consignment Boutique is featured in the new show The Mob Wives of Chicago on VH1. Many Chicago celebrities and local people of influence are now shopping and consigning at Le Thrift, but for her client’s privacy you will just have to stop by to see who is shopping here. Also look for Le Thrift to participate in Chicago Fashion shows featuring their upscale designer brands like Prada, Versace, Chanel and more with M.GO Fashion Salon.