Some would say the resurgence and popularity of flea market shopping may be rooted – for Americans at least – in the Great Recession because of the reasonable prices. A lot of people are realizing that they’re a small business owners dream; little investment capital required to sell new or second hand goods to massive consumer audience. 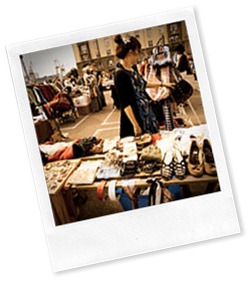 If the Recession hit American’s in the wallet where they hear best, it is without joy that some also predicted a similar fate for climate change: no question about their importance of either, problem was, how could leaders change the American mindset of consumption, waste, and the negative effect on the planet? Until now, even in these tough times there seemed to be little reason for belt tightening, much less going green. It was as if the air we breathe seemed inconsequential until “sustainability” was born and the hook for the fleas? Vintage. Followed less it’s even less sexy counterparts: frugal and green.

According to cultural anthropologists the real message in vintage is nostalgia. Not a hard sell. But frugal and green are another story because they are at odds with the American character culturally. Americans are at odds with frugal. They are comfortable with debt and risk which can be short term assets for entrepreneurs, but long term drawbacks for sustained economic health. And as for green, this runs counter to a “disposable culture”. Eventually, many of us have had our come to Jesus moment, and acquiesced to the realities of our low bank accounts and polluted planet whether we like it or not. 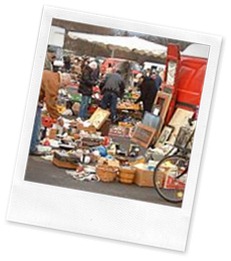 Still, around the world for thousands of years, people still regard the fleas and open air markets as a permanent fixture for the daily getting and spending; no gimmicks required. No marketing, no hooks. From Souk to bazaar; emporium to exposition with every fair, plaza, rialto, and shopping mall in between, this is simply how the rest of the world shops. Sure, the fleas have been around for a couple of centuries in the U.S., but it’s hard not to notice that they’re legit with reality shows like American Pickers, Junk Gypsies, Cash and Cari, and Market Warriors; books like I Brake For Yard Sales; magazines like Vintage Style and Flea Market Style; not to mention a useful Flea Market apps, most notably by TagSellIt.com. 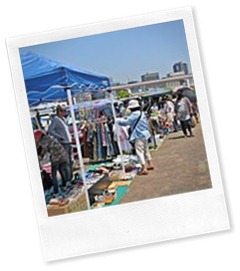 Yes, fleas are popular but some say they’re also the last bastion of opportunity available for free enterprise we have because the banks aren’t lending to small business owners. Nowhere will an entrepreneur find a more receptive environment to do business than at fleas (LaFarge, 1998). No long term commitments. No capital required. Even the humblest entrepreneur can rent space for as little as $10 to set up shop and sell for profit.

The fleas, as we experience them now in the United States, are about getting back to basics but they’re also a valuable glimpse into how much of the world still shops on “market days”. Just maybe, as we see American flea markets taking a more prominent (respected?) place in retail, we can also take advantage of a tremendous hidden benefit: experiencing how the rest of the world shops; openly, socially, unpredictably and joyfully.

Whether it’s the ancient Greek agora, which was (and still is) a central gathering place; the Forum in ancient Rome, or les puces in France, it still means the “shops” or “market day”. With more than 5,000 flea markets and counting in the States, a million vendors and a hundred million shoppers, looks like we’ve taken one step toward getting back to basics and one giant leap to better living.

Lisa La Valle-Finan is the owner of Old World Living Designs, a home furnishings company that captures the essence of European style on a flea market budget. Known playfully as the original “flea market fanatic” she decorates using “original, vintage, and found pieces’. The host of affordable flea market shopping trips to Europe throughout the year, she not only guides her clients through the fleas but shares her knowledge about local culture at the same time with a handy background in cultural anthropology. You can purchase all of her items for your home at her Etsy shop at http://www.etsy.com/shop/CREATiVECONVERZeNS. and now at Born Again Vintage in Montclair, NJ. To learn more email her directly at [email protected]