Whether I’m at the Meadowlands Flea Market in Secaucus, NJ on Saturdays or my favorite flea in the world, the Cours Saleya in Nice, France on Mondays, I am reminded that they are both a container for the human archive; the story of us. Flea markets provide us with clues as to what our talents and achievements were. Our capabilities and our dreams. I imagine that an anthropologist from Mars would choose the flea markets of the world to get to know our species. It is here that there would be real insight into who we were and how we evolved.

The anthropologist would know how we communicated from the discarded telephones and typewriters; the pens and pencils, paper and tape recorders. The human detective would piece together how we expressed ourselves from the remnants of old note cards, stationary, writing quills, ink pens and address books that have been replaced by digital devices like the smart phone, the tablet, or a laptop. The getting and spending of our lives, the business of mankind would be laid out before him in a sprawl of aisles that speak to another era crammed with artifacts, objects d’art, doo dads and gee gaws. Things that remain simultaneously trash and treasure in the great heap of humanity and their wares.

Fleas are of things past, yet they are in vogue. Vintage is now a vantage point. That sigh of once common things, passing us by. In her book Obsolete, Anna Jane Grossman wrote an encyclopedic compendium of just that and she too explores the question, are we nostalgic and wander flea markets because we hunger for the past? And if we do, is it because we want to revive what has become obsolete?

In 1990, my husband told me that he thought it’s astonishing that his grandmother was born in the era of the horse and buggy and lived to see a space ship rocket to the moon. It was improbable back then to me that I would ever experience such a change, let alone in the next two decades, but I did, and at an even faster pace than his grandmother did. I returned from Europe in 1986 to work with those green screened computers. I was in the midst of my career in publishing and PR in 1993 when the first stirrings of “websites”. My son was born in 1997 when the CD was popularized. And my daughter was born in 2001, when the iPod debuted.
Now, in 2012, I am surprised (and not a little disturbed!) to know that the majority of things I grew up with, or were even invented in my recent past, are now obsolete. Odd really, to think that I am living in that brave new world typed out on a Royal typewriter a century ago. The very objects, ideas, behaviors, and occurrences that once seemed familiar are now taking their place in the flea market museums of mankind around the world. 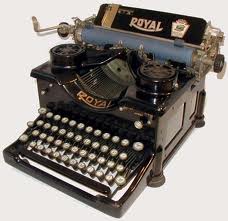 As a writer, I was particularly excited to pick up two very obsolete and obscenely heavy typewriters at the Meadowlands Flea last Sunday, once owned by the same woman, for a dollar each. I don’t know what the resale value is, but I am not interested. I want to keep them around purely for nostalgic and collecting purposes. One is an Underwood #5 (considered the first modern typewriter) that came out around the turn of the century, and the other is a Royal which came out later, and remained popular with literary giants like Hemingway who wrote For Whom The Bell Tolls on it. I am told that his sold at auction in 2007 for $2,750.
Like Grossman, I wonder how we will continue to cope with such rapidly changing world. How much faster will it change? How much will we discard and how much do we need to save? Does our fondness for fleas and things vintage reflect some heightened sense of nostalgia? Is it after all, not just a phase or lifestyle, but perhaps one way we deal with a world that is, as she suggests, is slipping away.

Check out my articles on Examiner