Brooklyn Flea’s Smorgasburg will build on the popularity of its Saturday Williamsburg all-food market—Mario Batali called it “The single greatest thing I’ve ever seen gastronomically in NYC!” on The Chew—when a second waterfront location launches on September 9, at the historic Tobacco Warehouse in Brooklyn Bridge Park. Smorgasburg DUMBO, a project with Brooklyn Bridge Park, will be open every Sunday through November 18 from 11am to 6pm, featuring a mix of prepared and packaged artisanal foods sold by more than 75 local vendors. (The market will not be open Sunday, September 30, during the DUMBO Arts Festival.)

“The Tobacco Warehouse is a perfect companion to our Saturday Williamsburg venue,” said Flea/Smorg co-founder Eric Demby. “On the waterfront, unparalleled skyline views, surrounded by gorgeous parkland, accessible by East River Ferry, and quintessential Brooklyn. We’re so psyched for this one.”

“We are thrilled to welcome Brooklyn Flea and its Smorgasburg market back to Brooklyn Bridge Park,” said Regina Myer, President of Brooklyn Bridge Park. “The addition of local and regional artisanal food vendors not only serves to enhance the park experience, it also complements the fantastic offerings that already exist in DUMBO.” 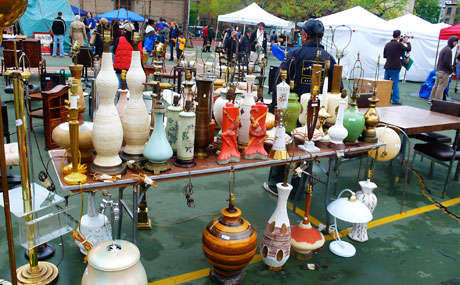 The Flea has been pursuing a second food market—and fourth weekend market, including two Brooklyn Fleas in Fort Greene and Williamsburg—to create new opportunities for its hundreds of food vendors, all of which are small, growing local businesses in need of additional revenue to solidify their operations and allow for longer-term expansion and planning. The DUMBO location provides that venue, as well as access for those less likely to travel to the Williamsburg Smorg. With Jane’s Carousel located steps from the Tobacco Warehouse, a perfect family outing is easily achieved. And a jaunt to the Williamsburg Flea on Sundays is just a 10-minute ride from the East River Ferry’s DUMBO stop.

In other news, the Flea was named one of the World’s Coolest Bazaars by Travel + Leisure. On Saturday, September 15, Smorgasburg hosts a dumpling-eating contest/fundraiser for Food Bank for New York City. The weekend of September 22 + 23, the Flea hosts the French Le Fooding festival at both markets. On September 29, SmorgasBar taps the best up-and-coming local breweries for an Octoberfest celebration. And on October 6, the Brooklyn Flea Record Fair shows up at Smorgasburg for its fall appearance, with 32 top record labels, DJs, and collectors.