One of my favorite books is “Rich Dad, Poor Dad,” written by Robert Kiyosaki. There’s a great statement he makes early on in the book that I strongly believe where he says, “not having money is the root to all evil.” In a statement preceding this quote, he says, “For the people who say money is the root to all evil, it probably means they don’t have any.” But does the same concept apply to the minimalist movement? Can you live without an abundance of “stuff” or “conveniences” and still be content?

The recession our nation and economy continues to struggle to emerge from has dealt a fair amount of bruises to corporate America, Entrepreneurs and families across the entire country. For some, this was a wake-up call, or rather an enlightenment to pay more attention to their surroundings and define what’s most important to them in life. They asked themselves “can downsizing my possessions really make me happy?” “Can I live with a minimalist mindset and still enjoy everything I like?”

We interviewed a half-dozen professionals who are either practicing minimalism or are incorporating the concepts into their lifestyles as a new change.
We asked:
1. Who is leading this new trend and who is participating?
2. Where is the idea catching on fastest?
3. Is the lifestyle of “excess” a fad of the past?

Blogger and Entrepreneur Colin Wright is a Minimalist and publishes a blog called Exile Lifestyle. He owns about 50 possessions and carries them with him as he travels the globe. He says “There are numerous magazines and TV shows that touch on Minimalism, but they are mostly latching on to the sexy side of the movement, which is reduction, reduction, reduction.” “It’s good to streamline, of course, but the main focus on minimalism is to get rid of the things in your life (possessions, people, activities) that don’t give you value. You can then use the resources freed up by streamlining to invest more in things that do bring you value.”

Colin says “All kinds of people are participating in the movement, you see a whole lot of 20 and 30-something professionals taking a step back and realizing that just buying more stuff wont make them happy, which leads to downsizing and, hopefully, some degree of philosophical fulfillment.” He believes the coastal regions are picking up on the trend faster and are more apt to try living a new lifestyle than the relatively more conservative Midwest areas of the US. “Were told from birth to death that we should buy this and that and then we’ll be happy, it’s a hard habit to break. There will invariably be some people who legitimately do get philosophical fulfillment from just owning a whole bunch of stuff, and I don’t see any reason why they should be criticized for that…its just the scale of the problem now that makes it a real concern.”

Simple Living and minimalist blogger, Paige Hodges, has her own ideas on minimalism. Her blog Redefining the Meaning of Wealth is full of great “simple living” themed articles. She says “Having less may seem counter intuitive to how we are accustomed to defining wealth, but I would like to make the argument that owning less may actually make us richer.” She argues, “If you’re not careful, your possessions can end up owning you rather than you owning them.” Of course material possessions are liabilities. Paige also shares “The more I de-clutter and pass on things I no longer need or use, the wealthier I feel. I feel better because I feel lighter and less distracted. I’m more open to learning and experiencing new things.” 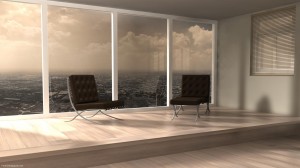 Julie Ellis is an Entrepreneur and Executive Director of Twin Tiers Business has embraced the minimalist concept with her family. Since 2007 she’s paid off a mountain of debt by starting two businesses and focusing on the “less is more” concept, working from home to support the household. “During the past 3 years, we’ve sold off everything possible including the huge house and extra vehicles. We’ve found that having less has freed us from the worries of meeting multiple mortgage payments, car payments, property taxes and the list goes on. We sleep better at night knowing these things are off the list to have to tend to and think about every day. It has allowed us the opportunity to grow the businesses and focus on doing more meaningful things in life, such as camping and having more time to spend with each other.” She says although there’s at times a struggle to make ends meet, her family is free from debt chains and commitments that once held them to the wall.

Susan Todella’s has a blog Susantordella.com that emphasizes the importance on raising children to make good independent decisions. Her husband worked successfully in corporate America for 24 years until “it became soulfully apparent that it was taking a toll on his soul.” Her family’s income dropped considerably when he left to start his own business, Red Oak Renovations, but she says “despite less money, we have more happiness and satisfaction,” and her husband won’t be returning to corporate America. She explains that the move came from within and not from society. They downsized from a “high-status” neighborhood to a working class area and cut corners everywhere now but still have enough to live on.

For artist Pablo Solomon, he says minimalism is a lifestyle and can be found in expressionism. He has always been at the forefront of minimalism. He was highly influenced by the simple balance and beauty of Japanese art and design. “I have always felt that positive and negative space had to be in harmonious balance. Those who know me and my work, know that clutter is a dirty word to me.” Pablo says “minimalists understand that the bones of a living space really define it.” He says “In an ever more complicated and stressful world, minimalism offers a respite from the chaos of modern life.”

Author and home design expert Lauri Ward published “Downsizing Your Home With Style,” a book based upon her observations that many of her baby boomer clients were moving into smaller homes because of oversized empty nests and to prepare for retirement and a simpler life. Lauri says, “Today it seems as though younger and older people are all consciously trying to calm down by embracing the ‘less is more like it’ mindset. And, at least among my clients and friends, there are more things dwindling in size than the square footage of the average home.” “Lexus owners are buying Priuses. Folks are ‘staycationing’ instead of traveling to Europe. Masters of McMansions are exchanging their palazzos for smaller homes located within walking distance of towns and cities; they are bicycling, recycling and are on the lookout for new farmers markets and local sources of organic produce, since they’re eating out less and cooking in more.” As for her clients she says, “they are busy de-cluttering their rooms, cleaning out their closets, and donating the things they no longer use, in order to make their homes look more open and airy and feel more comfortable. They’re not interested in buying more stuff or adding to collections; their goal is to live simply and use only the things they actually need and love.” Check out Lauri’s blog, Redecorate.com for a wealth of information and creative ideas.

Dr Tom Potisk has been a holistic family doctor for 25 years and is the author of
“Whole Health Healing: The Budget Friendly Natural Wellness Bible for All Ages” He has observed first hand how clutter contributes to poor health. He says patients “become subconsciously overwhelmed and it limits their social and physical activity.” Dr. Potisk says it occurs most predominately in the age group 55-75 when they tend to accumulate a lifetime of un-needed clutter. However, he’s observed within the last 2 years that this age group has been recognizing the problem and de-cluttering.

There’s been a lot of interest about this lifestyle in the press and in the blogosphere recently. How do you live your lifestyle? Feel free to share your comments below.