Week Two and an article I ran across in Smart Money “10 Things Flea Markets Won’t Tell You” (Grant, 2012) is vexing me. Not so smart either. As if the “old world” markets and bazaars are going to learn something about getting and spending from today’s consumer reporter. Really, can I find better prices at a yard sale, really? I feel relieved her advice will prevent me from getting fleeced at the fleas, really.

It’s not that I have anything against lists or tip sheets. Heck, I created a Flea Market Check List here for you TSI-ers, but the author writes like there’s a science to the Fleas. Which there probably is, but I don’t want to know about it. Doing the Fleas is a process. Like getting older and wiser. You can’t really rush it. It’s just not authentic. You can act as if you know how to haggle, but it has to be instinctive, in order to be a success, you know?

Still, this scientific understanding of things is fine, really. I do it myself. We all do it. It’s in our genes. Especially the  the ones  rooted in legacy we inherited from Greek civilization. Geographically, Greece is made up of hundreds of little island bits. Cultural anthropologists will tell you that the countries (like the Unites States) with a history marked by European immigration or settlements, have an “atomized” thought process, like those islands. We tend to demonstrate a profound curiosity to break things down, and to discover the “true” nature of a thing, like a flea market for example. Although we inherited this cultural trait honestly, I still don’t like the idea pulling back the curtain on the magic of the Flea market experience.

I rather like the fact that the Fleas are messy, unpredictable (and did I say disorganized?).They’re brining with art, antiques, and objects that can be unfamiliar, but that ultimately teach me something new about the place it originated, about artistry and design. Perhaps that’s just the gypsy in my soul naturally rebelling against grown up rules like being on time and organized. I like that they are none of that. They remind me of living in Europe, where I was comfortable without those boundaries, and every day was a new experience.

When I wander through the aisles, I am practically in a meditative state. Don’t know how I got to this stall, or why I am handling this fabric, before you know it, I can hear myself saying ohverynicehowmuch?

Yep, open-air markets and the Fleas have been around for thousands of years, since the dawn of civilization, and I can’t help but think that we really do know, instinctively, how to shop and bargain and haggle just like we know how to parent, even if it’s for the first time.

I also think that the sudden trending of Flea market mentality has not so much to do with thrift as it does with Facebook. Does anyone know where I am going with this idea? 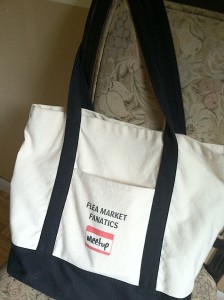 Does anyone know where I am going with this idea? Post your comments on this page and the first one to “get where I’m going with it” gets a free Flea Market Fanatics tote (a $25 value!) because you gotta have something to put your loot in, right?