Recently, a client came to us for a personal asset loan using her late husband’s vintage Rolex watch as collateral.  The watch has a very unusual dial compared to modern era watches.  During our investigation, we uncovered a very colorful history of watches of this type.

Our research led us to a blog by HODINKEE, one of the most widely read wristwatch publications in the world. Rolex is the most famous watch brand but their reputation for quality and exclusivity sometimes turns people off.  There is a heartwarming story of trust that took place in a WWII German POW camp that I would like to share with you.

During the war, Swiss watch sales dropped way off, especially after Germany invaded Vichy France in November 1942 and neutral Switzerland found itself completely encircled by Axis powers.  Swiss watch companies were isolated from their best customer- the British and Americans.  Rolex, however, discovered that there were plenty of British and Americans nearby in German prisoner-of-war camps.  Stalag Luft III, for example, housed 10,000 Allied airmen, shot down in operations over occupied Europe.  Thousand more Allied officers were captive in the various Oflag (officer’s POW camps) scattered throughout the German Reich.

Hans Wilsdorf, founding director of Rolex and a German himself, made the extraordinary offer to POW’s.  They could order any Rolex model they wanted “but you must not even think of settlement during the war.”  The news that Rolex was offering watches on a buy-now-pay-whenever basis must have spread through the camps like wildfire.

It meant that Wilsdorf was betting on an Allied victory.  By early 1943, this was a risk worth taking.  The tide of war had turned against the Germans and Italians.  But this offer of such trust must have been a wonderful morale booster for the POW’s.  Besides being a comfort in a POW camp, watches were part of an airman’s kit, and many had lost theirs on capture or in trying to avoid it.  For prisoners who were considering escape, getting to the borders could only be done by public transportation.  A watch was as essential as a train timetable.

Wilsdorf hedged his bet further by making it available to British officers only, in the belief that their word was their bond.  He had started his watch business in England, but moved to Switzerland after World War I for tax reasons.  The Rolex watches had already become popular among British Royal Air Force pilots.

The watch that our client brought to us has a very interesting dial.  It has an odd combination of Arabic and Roman numerals, and plain markers.  The dial was originally designed for Allied forces during World War II and the mix of roman numerals and Arabic numbers was meant to act as a ‘geographic shield’ for troops who might be captured by the enemy. The mixture of styles on the dial gave the captive a degree of anonymity, as a purely Arabic style was considered likely to indicate the wearer to be from the United States where the style was more prominent.  The dial is reported to have been patented by Rolex in 1941 and was known as the “High visibility” dial, as it used quite large luminous numbers.

The dials became very popular during the Vintage Rolex “bubbleback” craze of the 80’s. An L.A. based dial refinisher, Kirk Rich, did some dials with this design.  They became popular and many vintage watch stores in California sent their dials to him.  So dealers in the rest of the US and the rest of the world began to call them the “California” dial. 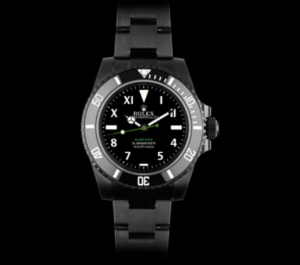