Rick Harrison, star of the hit series Pawn Stars, is famous for saying, “You never know what’s going to come through that door!”  The thrill and excitement of working in a pawn shop is the fact that interesting items are always coming into the shop!

Most people probably think of pawn shop items consisting of jewelry, electronics, and artwork. These items don’t usually cause too much excitement or get people to say “Wow! I have never seen that before!” Think again because, at our online pawn shop, we had some pretty unique and unusual items come though our door this past week that we would like to share with you! 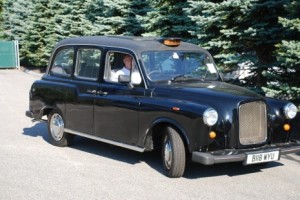 What is black inside and out, built in 1984, has traveled the equivalent of 5 times around the earth, has 6 wheels, and drives on the wrong side of the road?  Answer: The London Taxi cab in our warehouse.  This wonderfully restored cabbie from across the pond, built almost 30 years ago, runs and drives like it could go for another 130,000 miles.  The interior room of this car makes a New York yellow cab look like a Mini Cooper.  The amount of Louis Vuitton luggage you can fit in the front row space, where a U.S. driver seat would typically be, is impressive. This is a 4 cylinder diesel car, with 127,351 miles, made by London Taxi International, and was recently reconditioned.

We also received a matching set of Louis Vuitton Luggage. There are two pieces of hard sided luggage, an Alzer 70, and a cosmetic train case, as well as a Pegase 65 rolling bag. We took a photo of them being loaded into the London taxicab because we imagined that would be a very luxurious way to travel.  The lady who pawned them didn’t want to sell them because they were a gift from her late husband.  She needed cash to pay a tax bill and expects to have it repaid in a couple months. 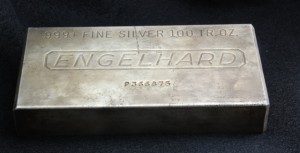 Have you ever owned a solid bar of silver?  I had only seen them in pictures and on TV, until a few days ago.  Earlier this week we had a women come in with a silver bar stuffed inside an old ski gloved. The bar was originally purchased sometime in the mid-1980’s when silver was trading around $13 an ounce.  The day we wrote up the pawn, silver was trading at $34 an ounce.  That means that this bar, which is 100 ounces, is worth $3400.

An interesting thing about a solid bar of .999% pure silver is its weight.  When you look at one of these bars, you expect it is going to weigh 20 or 30 pounds, however, it really only weighs 6.8 pounds.  Quite deceiving.  How did I know that it was in fact real silver?  Just like the acid test jewelers and pawn shops use to verify what karat gold an item might be made of, we did the same with this silver bar.  We applied a single drop of the solution, directly on the bar and waited a few seconds for the result.

A light green color would have meant that we only had a bar of 65-75% pure silver, but our solution turned a creamy color.  This indicated that our silver was 100% pure. 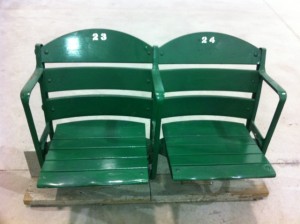 Although they didn’t come in last week, one of our favorite items is a pair of seats from the Old Tiger Stadium in Detroit, Michigan. This stadium is no longer standing, but still has a baseball diamond in the original location.  The ball field is located on the corner of Michigan and Trumbull Avenues in Detroit, Michigan and baseball has been played at that location since 1895.  Tiger stadium was opened on April 20, 1912, the same day Fenway Park opened for the Boston Red Sox.

The Detroit Tigers played their last game there on September 27, 1999.  Now fans of this team have sought out to own a piece of the stadium, more specifically to own one of the old wooden seats that were installed sometime in the 1930-1940’s.

One of our founders, Tom Persing, grew up in Michigan and is Tigers fan. You can imagine how exited he was when a customer wanted to pawn, not one, but two original seats from the old ballpark.

Now, can you imagine his elation when our client asked us to sell the seats in order to pay off their loan?  Let’s just say that even though they are for sale, I doubt they’ll ever leave our shop.

If you would like to be notified if any of these items ever come “out of pawn” and up for sale, please feel free to email me.

Follow us on Pinterest to see even more interesting items that have been pawned in our shop and in other pawn shops! 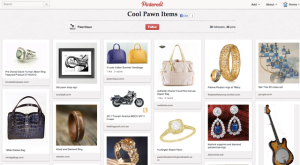 Do you have photos of interesting items found at pawn shops? If so, send us your email and we will grant your permission to “pin” on our boards!